The kids are revolting – why we had to dump trump 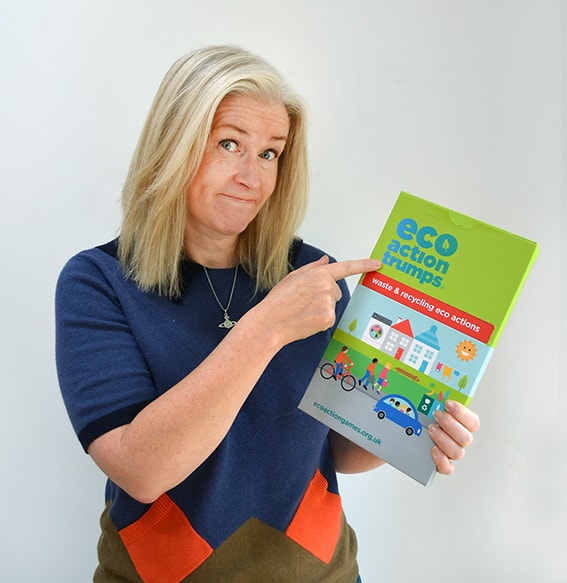 So, we are all feeling a little bit hopeless and forlorn at the moment – right? Still battling to get through the stages of Denial, Anger, Bargaining, Depression & Acceptance but kinda stuck at the Anger stage?

That feeling of helplessness in the face of a global calamity, the thought that there was nothing anyone can do to make things better – yep, we’ve all been there! But, joyfully, we have recently found a way out of this doom & gloom, a way to take back a little control and to feel empowered again!

Here’s the thing, we have been working in schools lots lately, using the whole compendium of our re-engineered social games to get those environmental messages across in a fun, interactive and inclusive way, and it has been working really well, especially using our star product, a twist on a popular, traditional British card game – trumps.

You might be able to see where we are going with this?

Our eco action trumps card game has been entertaining and educating children, and adults alike, pretty successfully over the last three or four years, selling in the region of 50,000 packs. However we have now hit a branding nightmare situation! Since the US election we have found that the game has been sullied by its inadvertent connection to the President Elect. The kids now think the game is all about ‘The Donald’, and, fair play to them, they are all pretty well informed about him and what he stands for.

Cue a typical Year 3 (7-8 years old) boy’s recent reaction to our innocent little game, “Yuk, is this a game about Donald Trump? He’s horrible he is, he hates girls and black people and Latinos and Mexicans and he’s going to build a big wall to keep people away – he’s really stupid”. Fair comment, I really couldn’t argue with him and was quietly impressed that he was so well informed about world affairs at such a tender age!

Hence lately we have been finding it really tricky to get our positive, eco inspired messages across in this new world order and that has been pretty depressing.

So you can imagine our dilemma: What on earth to do about it?

It seems a tad ironic that a game devoted to teaching people about the positive actions they can take to help save the planet, has the same name as a man who seems hell bent on trashing it. How could we share a moniker with a climate change denying, potential Paris agreement wrecking, fossil fuel loving President Elect?

Eventually we had a light bulb moment! This situation has left us with no choice, America might be stuck with this guy for the next four years, but we don’t have to be, hence we are going to dump trump for good!

So, on the 20th January 2017, inauguration day, we will be saying RIP eco action trumps and burying the brand for ever. We will return, with a new name, minus the toxic associations, shortly after.

This did leave us with a dilemma though, as we have quite a lot of stock still to sell, and we could not literally dump it, as that would go against every value we stand for. So, given the festive season is nearly upon us, and that we all need something to cheer us up, we have decided to give the remaining packs away to anyone who wants one (until our trumping stocks are exhausted obviously). So that is what we did, gave them all away!

And the media has really got behind our little plan. On the 29 November when we went public with the story,  the BBC News online ran the story, read it here and it remained the 5th Most Read article on the site – which amused us no end.

And even the big boys of the playground, Top Trumps, felt obliged to put out statements on Twitter to say that no, they were not changing their brand name! Incredible!