We have just returned to eco trump towers after a wonderful week of watery playgrounds at the international World Water Week conference in Stockholm. 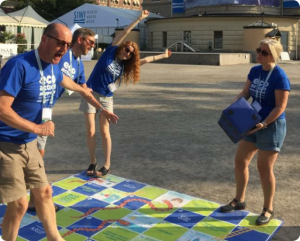 We were able to attend the conference thanks to the kind sponsorship and support of Arup, and were hosted by the event organisers SIWI (Swedish International Water Institute).

The photo to the right shows our Stockholm eco action team enjoying the beautiful weather we had all week– from left, Michael, Johnny, Lydia and Paula.  Mark from Arup also helped facilitating the games, and turned out to be a natural eco fun maestro, he was a big hit with the Swedish children on the snakes and ladders board!

Stockholm itself is built on 14 islands, which means that water is at the heart of everyday life there as you are constantly crossing bridges to get to different parts of the city. Here is one of many beautiful photos we took of the city itself. 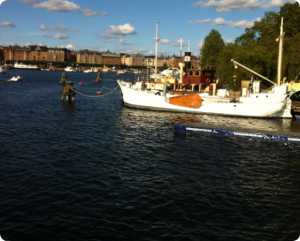 Given its watery surroundings, it is apt that Stockholm is home to the annual international World Water Week Conference. The conference has been the annual focal point for the globe’s water issues since 1991, making this year the event’s silver Jubilee. The conference is a platform for over 250 collaborating organisations to convene events about water and development issues. It is also an opportunity for individuals from around the globe to present their findings at the scientific workshops. There were over 3000 delegates from 143 countries gathered to discuss all things water-related. 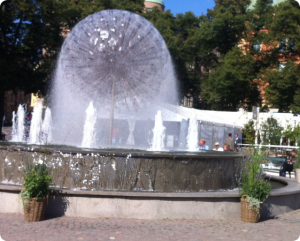 This year, we were one of those 250 organisations and we popped-up a water themed playground every day of the conference, outside, in the sunshine, next to this beautiful dandelion-esque water feature.

Each morning our watery playground was visited by groups of children from local Stockholm schools. The first morning of the conference we had a lovely group of children all age around 8 & 9. Although they were very interested and enthusiastic about the games, in Sweden children only start learning English at the age of 8, so we had a few difficulties communicating our water wise messages. However, with the help of the amazing Helena as a volunteer translator we were able to get the water saving message across to the children, and even teach them a few useful English words in the process. 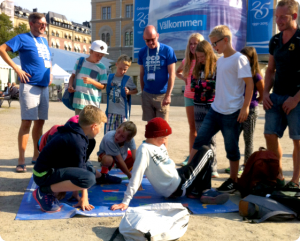 As the week went on we were visited by older  age groups which made the language barrier a great deal smaller as their English improved at a rapid rate with age. 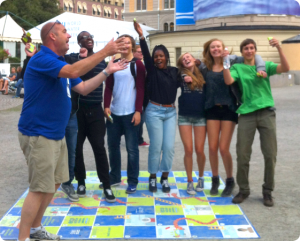 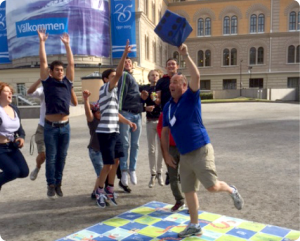 By the age of 15, the children were practically fluent, and needed no help understanding our water saving messages. 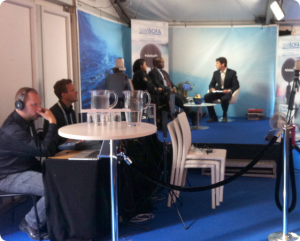 In total we were visited by over 250 school children and 100s of delegates who were participating in the conference. We gave out over 760 watery themed top trump packs and met people concerned about water sustainability issues from all corners of the world. In total we estimate we must have talked to and played with over 1000 people in the week.

As well as running the daily eco action playgrounds, we also got involved with other aspects of the conference. On Wednesday we presented at the ‘Young Professionals in Sustainability’ booth. Between Paula (who has been a sustainability professional for over 20 years) and Lydia (very recent graduate) we just about fitted the bill of young and professional! Interestingly the booth was situated opposite  the #siwisofa (Stockholm International Water Institute) where filming was taking place for the World Water Week website. 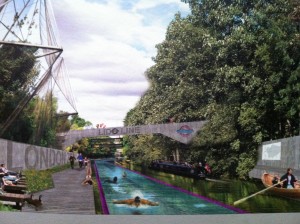 Paula also presented at a workshop called “Inspire Youth to Become Water and Development Ambassadors” on the Thursday of our trip, where she spoke about our innovative, fun and creative way to inspire environmental behavioural change. We also attended seminars on topics such as the effect of climate change on conflict and migration and also how gender plays a part in access to water and sanitation.

Once the conference was finished we had a day before our return to explore the stunning city of Stockholm. The Museum of Art and Architecture had a fantastic exhibition about sustainability which merged modern, creative design ideas with solutions for sustainability problems in urban areas.  Pictured left is a design of what Regents Canal could look like if it was made into a commuters’ swimming highway! 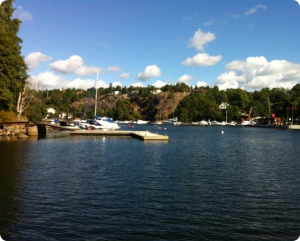 We had a truly wonderful and watery week in Stockholm (yes, we even swam in the Baltic sea and can confirm that it is definitely cold!) and thoroughly enjoyed the action packed playgrounds with a massive variety of people from all over the world.

We hope to be back to this beautiful place and inspiring conference again next year.