Never mind the planet’s resilience, we had our own resilience sorely tested at COP21!

On Thursday night Paula and I returned from an extremely eventful 4 days at COP21. There were some brilliant highs but also some infuriating and hilarious lows, which tested our resilience (as opposed to our day 1 of COPmas theme –  the resilience of the planet!) to new, uncharted levels. 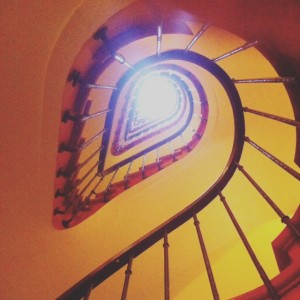 First, the lows…..On arriving in Paris late Monday night we jumped in the nearest taxi to take us to our AirBnB, which resulted in being catastrophically ripped off for a 15 minute journey.  Then, as we were tutting our way out of the taxi the driver put the fear of god into us by declaring in best Franglais that we were in the dodgiest area in the whole of Paris (it was in Saint Denis after all)! So the man who had no qualms about right royally ripping us off was worried enough about us to stand and watch us as we got into our flat…the area was apparently that dodgy!

The bad luck continued as we discovered, on entering the apartment, that we were on the 6th floor and there was no lift, only a very narrow wooden spiral staircase! We had two 25kg suitcases full of games equipment and everything we needed for our event which were so heavy we had to do 3 return journeys up and down 6 flights of stairs! So this was about 10pm and we were pretty exhausted, but then, zut alors, our Airbnb host wasn’t answering! My phone had died and with Paula’s last 1% she managed to get hold of the host, who spoke little English, who eventually came to meet us and let us in – we then collapsed in an exhausted heap and slept soundly. 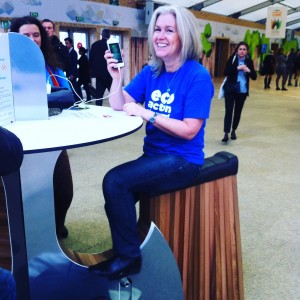 The 10 mile journey to the COP21 venue the next morning took a grand total of 2.5hrs and consisted of getting lost on the walk to the station, buying the wrong train tickets, and then being stranded on the train whilst a ‘suspicious package’ was investigated in the station at le Bourget, but we made it in the end. Paula’s first stop was a bike powered mobile phone charger  – you can see her pedalling furiously HERE  – she loved it and wished her gym could install them! Although after 10 minutes of solid cycling she’d only added 1% to her phone’s juice level – which just goes to show how we take energy ‘on tap’ for granted, it was coincidentally day 2 of our COPmas campaign whose theme was energy use, so seemed appropriate that we were producing and using our own. 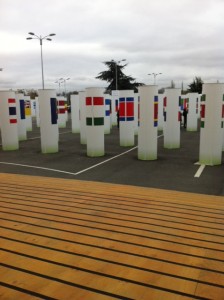 The mishaps didn’t stop there however, and our second day was just as eventful! So, after more struggling on the 6 flights of stairs to get all our games back down to take to COP21 for our event, we had the bright idea of getting an Uber taxi instead of battling public transport again. Just after congratulating ourselves for our cleverness in choosing Uber to get us there quickly and without incident, we got out and indicated to the driver (who didn’t speak English) that we’d get our suitcases out of the boot – he was being hassled at the time, by policemen with big guns, to move on. We stood next to the boot ready for him to open it, but imagine our surprise then, when he just sped off! We were frantically waving and shouting but he drove on oblivious to our distress and as we ran after him we received some stern looks from big, unfriendly looking, military types with even bigger guns, so we thought it wise to stop.

Rather gobsmacked, we watched our taxi disappear out of sight. Everything we owned was in the boot of that car!  After much panic and stress, a very kind French police man with impeccable English (yes they do exist!) helped us track down the driver and ordered him back – unfortunately for us he had picked up another fare and was en route to central Paris. So eventually, only an hour and a half late, we set up our eco action playground outside ARUP and AQUA’s Water is Climate event, and play commenced. 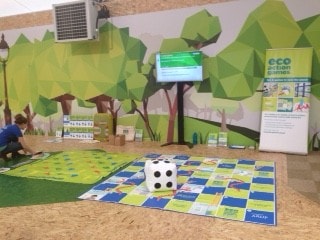 The other extraordinary finding which took us by surprise at COP21 was the realisation that the French apparently love queueing even more than us Brits! The lunch queue was at least an hour every day and you can imagine my frustration when I finally got the front only to find there were no veggie options left! It also happened to be the third day of our COPmas campaign, where we discussed the environmental and climate change benefits of vegetarianism. We were absolutely starving, but tried our best to be stoical and resilient (again), and eventually found it very funny – once we’d upped our sugar levels with cake and stopped bitching about the carnivorous French!

Anyway…on a positive note there were many high points of our time at COP21. The multiculturalism of the conference was on a scale I had never before experienced and the positivity of the people in the Civil Society exhibit area was so infectious it made you feel like optimistic change was just around the corner and the right decisions will be made in the COP21 negotiations. 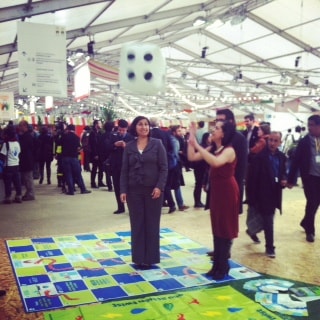 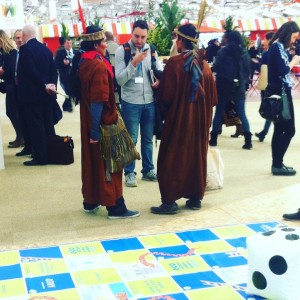 We played some great games and had fascinating discussions with delegates during our playground event – American players, on receiving a prize of our eco action trump game, declared that we really would have to change the name of the game if we were going to crack the democratic American market!  And we received a fantastic response to our COPmas cards, given out during our time there, we gave out 1000 in 2 days. It was also heart-warming to see our COPmas campaign taking off so successfully on Twitter while we were away and lots of NGOs and organisations wanting to support it.

There was loads to see and do in the ‘Climate Generations’ exhibit area which was open to the general public. Have a look HERE at a massive sound system powered only by solar and bike, and HERE to see a beautiful wind turbine shaped as leaves of a tree, called ‘Aeroleaves’.

So, what can we conclude from our time at COP21?  Well, if it was down to the people present at the expo over these 2 weeks then our planet would be in safe hands. It was really heartening to see all of the stuff happening across the globe, by diverse people with different interests and lifestyles, all with the same core purpose of this planet’s future survival and resilience.  We came away feeling we could cope with anything that was thrown at us, after the four days we just survived, and feel just as positive that there is enough good will and positive vibes in Paris at the moment to hopefully ensure a happy COPmas for every human and animal and the planet itself!