In March, eco action games popped up a playground at the Lib Dem Spring Conference in Liverpool. It was a fantastic weekend for us with an exceptional response from an impressive selection of MPs, Ministers, Councillors, a Lady Mayoress, Lords and Baronesses. 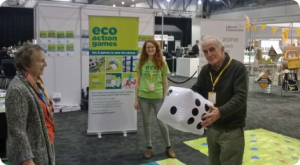 As always, eco action games proved to attract gamers from across the age spectrum.

The Liberal Democrat upcoming manifesto will include plans for five new green laws to protect the environment, and in an effort to highlight their commitment to environmental issues, a Green Zone was added to the exhibition hall at the conference. eco action games helped raise the profile of the Green Zone considerably and brought a huge injection of fun, colour and interaction to the exhibition hall. 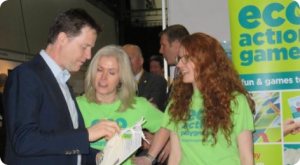 We had a variety of esteemed visitors to the playground, the first of which was Nick Clegg himself. Nick was very enthusiastic about our fun approach to environmental education and happily  accepted a compendium pack of games for his children.He commented on the importance of making learning fun and exciting and congratulated us on our work. 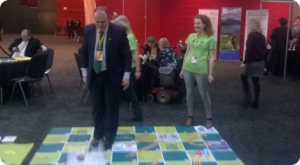 Ed Davey on the snakes + ladders board.

Chief Secretary to the Treasury, Danny Alexander also stopped by for a chat  and loved the eco Snakes & Ladders game we gave him for his kids, as did Secretary of State for Energy and Climate Change, Ed Davey. Ed spent time looking at each game in detail and, to his relief, did very well on play your eco cards right, proving he knows his stuff when it comes to carbon emissions. 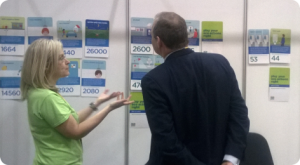 Neil Sherlock, PwC partner and former special adviser to Nick Clegg also visited the playground and tweeted eco action games calling it a “brilliant way to engage people in environmental action”. Neil’s wife, Baroness Kate Parminter was also thoroughly impressed by the playground and visited us twice to learn more about the games. 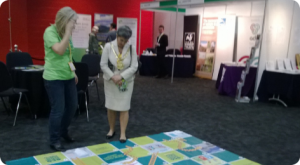 The Mayor of Liverpool inspecting the snakes + ladders board.

Other visitors to the playground included Dan Rogerson, MP and Defra minister, who loved the idea and took some eco action trumps back to Cornwall for his son. The Lord Mayor of Liverpool, Councillor Erica Kemp and her husband Councillor Richard Kemp, CBE and Leader of the Liberal Democrat Party Group also joined us at the playground.

The eco action team attended a business lunch with Vince Cable, the Secretary of State for Business, Skills and Innovation, where he answered questions from the floor regarding a variety of issues, including the role of the environment and conservation in business. 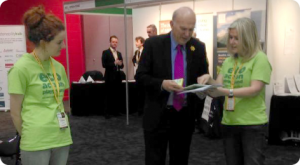 Vince Cable on the snakes + ladders board.

Vince later returned the favour and came to visit the eco action playground. He was a great sport and studied the games in great detail, wanting to learn as much as he could about how he could personally save water and reduce his environmental footprint. Vince and all the visitors to the playground showed genuine enthusiams for a game-centric approach and were all acutely aware of the need for effective environmental education throughout society.

We spoke to many people at the conference about eco action games’ latest report, which was launched at the conference. The report was written in conjunction with the University of Manchester, and adds to previous evidence which demonstrates that gamification is a fantastic way to engage people and change their behaviour. The report outlines research taken on a group of students who had participated in the eco action playground and told us how much their behaviour had changed a few months later. We can see from this research that a game-centric approach evoked long lasting behavioural change. 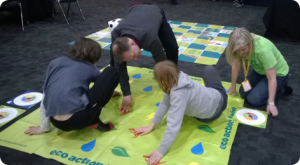 But, maybe not surprisingly, eco twist was more popular with our younger Lib Dem eco warriors!

Generally, the eco action team were overwhelmed by the positive feedback we received, especially from such influential politicians such as Nick Clegg and Ed Davey. Everyone we spoke to not only supported our fun approach to environmental awareness, but realised the necessity of a new way to address such pressing issues and change behaviour. Many visitors to our playground wanted to use the games themselves to teach in their respective schools and companies. You never know, eco action games may be popping up a playground in the House of Lords next!