On the 15th July 2015 eco action games popped up a playground in our most prestigious venue yet, the House of Commons!

In partnership with the Sustainability Hub, and sponsored by Carillion, the event was a great success with a range of distinguished guests including Lords, MPs, Parliamentary Groups, corporate representatives through to student interns. 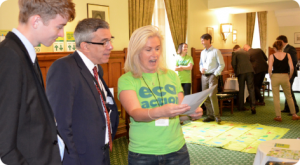 depths of the House of Commons, the venue was fantastic. We were in a beautiful wood panelled dining room which was adorned with food and refreshments. The picture to the left shows the room just as we opened the doors to MPs after Prime Minister’s Questions had concluded on Wednesday lunch time. 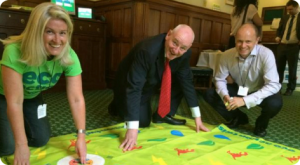 We invited every MP to our playground by sending them a pack of eco action trumps with an invite, and we saw a steady flow of MPs, all whom were very enthusiastic about eco action games’ approach to sustainability education.

Mark Durkan MP for Foyle (Derry City) was so taken with the games he joined in, pictured here enjoying a game of eco action twist. 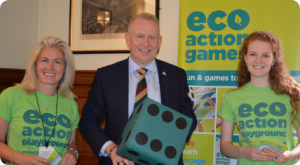 Graham Evans MP for Weaver Vale tweeted that he was very happy to be supporting eco action games mission to #makesustainabilityfun! Graham loved the eco action trump cards which we had sent him and also took another pack home with him. 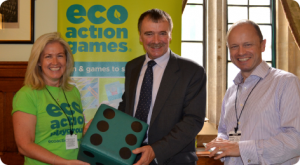 Dr Alan Whitehead MP for Southampton Test and Chairman of The All Parliamentary renewable and sustainable energy group (PRASEG). Pictured here with David Picton, the chief sustainability officer for Carillion and Paula, our Chief Fun Officer (she’s the one in the green T-Shirt). 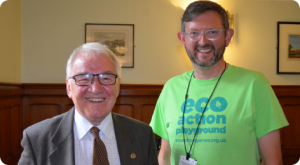 Lord Brookman of Ebbw Vale, Wales attended the event and was thrilled to find the company was founded by a fellow South Walian. He remarked that eco action games would be brilliant for his grandchildren and he stayed for the duration of the event. He is pictured here with Johnny, one of our eco action fun and gamers. 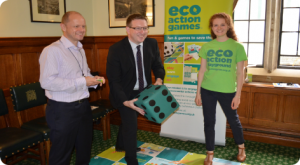 Andrew Gwynne is Member of Parliament for Denton and Reddish and he stayed for a considerable length of time at the event and looked at all the games in detail. He was very enthusiastic about the idea of making sustainability something non-threatening and attractive to children. He told us how fantastic it was that his children now know more about day to day actions which could make a difference to the planet than he did. 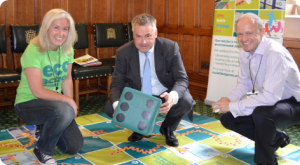 Tim Loughton MP for East Worthing and Shorehama is a keen supporter of environmental campaigns. For example, he has joined the campaign which aims to end the devastating impact of ghost fishing gear on marine mammals and wildlife and he also supports the Friends of the Earth Campaign to save Britain’s Bees. He also ordered a selection of eco action trump packs from us at the event for his work in his constituency. 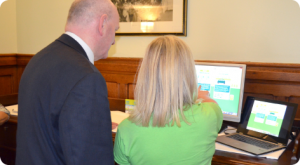 We were also very excited to launch our brand new on-line game of eco action higher? lower? at the House of Commons event. The game tests people’s individual knowledge of carbon and water savings and players  try to top the leader board in their allotted team. The picture features Paula showing Mark Durkan MP how to play.

Other visitors to the event included representatives from organisations such as the National Energy Action (NEA), and as a result of this event eco action games will be attending and running a pop up playground their annual conference in September, companies such as Argos retail, and from Carillion, our sponsor.